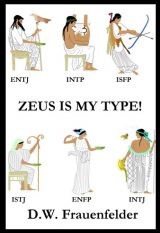 This one was really fun and fulfilled my Z requirement for the alphabet challenge! I actually found it by accident because I was going to read another book with Zeus in the title but couldn’t remember what it was called, so I scrolled through Goodreads and guess what came up?!

Have you ever wondered what Greek god you are most like? With Zeus Is My Type!, you’ll learn this and much more, as sixteen Olympian divinities of Greek mythology are analyzed according to the Jungian personality type system. Zeus Is My Type makes copious use of the original and early sources of Greek mythology– Homer, Hesiod, and the Greek tragedians– to show how the Greeks really saw the immortals. Are you bossy like Zeus and Hera, creative like Hephaestus, seductive like Aphrodite? Read and discover.

Get it here: Smashwords | Kobo

This was a really random selection but I’m glad I found it. The author is a “degreed specialist in mythology” as he puts it so he knows a lot about these Greek gods and goddesses. Each chapter is devoted to a different god/goddess and an MBTI type – he finds that there’s no overlap as they were set up to represent all human behaviour so it’s a nice even split for this analysis.

To start off, he provides an MBTI quiz so if you don’t know your type, you can figure it out here and then see where you stand in relation to the Greeks. I have taken the test before and found this quiz was pretty ineffective because I ended up being an equal split of everything so it may be better to do the quiz through a different resource (16personalities.com offers it for free!)

For the record, I’m apparently an ISFJ (sometimes also an ISTJ) though I don’t really agree with that but I’ll get more into it below.

He also gives a little intro on Greek mythology, including a short quiz to test how well we know our stuff (it’s meant as a trick – I got more than half wrong 😦 ). I really liked his explanation of why so many people get Greek mythology wrong – he sets up the stories as the original fan fiction because they were spun into so many different and varied versions from the original telling. He uses the earliest versions that are available in his book, so it’s possible the stories will be different than those you’re familiar with.

The best part of the book for me was that the author doesn’t only do a general overview of each divinity, lining up their characteristics with the MBTI types; he also incorporates many of the stories – both those you’ll probably recognize and some lesser-known ones to “prove” his arguments. I’ve always been a fan of Greek mythology so I really liked getting to read about some I hadn’t known of before, though in some cases I could’ve used more detail when the stories weren’t well-known (like Hephaestus and his robots – he totally skimmed over this!).

I felt that it got better as it went on, because Zeus and Hera, who start off the book, really didn’t include too many stories as their “proof” but just drawn-out explanations. Hades, on the other hand, had an excellent entry, and I’m only partly biased because it included my favourite Greek play, Antigone.

As for my type, the ISFJ, though I repeatedly get this result I don’t really connect with the description. It says this type is a defender and a people person and I’ve got to say, um no. I actually found that I really connected with the INFJ type in the author’s description of it, one of the types he actually uses a human rather than a god to best exemplify – Penelope from The Odyssey. She’s described as being more of a perceptive and observant person, needing to withdraw from the social scene to recoup, which definitely feels more on-brand for me. So maybe I’ll just pretend I’m this type 😛

The author ends with a “recipe” and though it wasn’t what I was expecting, it was very entertaining. This is the most creative writing in the whole book and it’s a blast (even though the narrator of this section is actually having perhaps the worst day of his life). Very funny and a great way to end the book!

Also, something I didn’t know before reading this – Myers-Briggs types were invented by a woman! Two women actually, a mother and daughter pair – how cool is that!

About the Author:D.W. Frauenfelder began writing stories at the tender age of very young and his first novel was the critically-acclaimed (by his teacher) “Dawe and the Typhoon,” about a boy from the South Pacific who has to shift for himself when his family is wiped out by a storm. Recently, Frauenfelder realized that “Dawe and the Typhoon” was probably written in imitation of the Newberry Award-winning novel Call It Courage by Armstrong Sperry, though he has no recollection of reading this book. Frauenfelder has followed up this homage by writing novels inspired by such diverse influences as P.D. Eastman (author of Go Dog Go), Else Holmelund Minarik (author of the Little Bear series), Ursula LeGuin (author of the Earthsea Trilogy), Homer (author of the Iliad and the Odyssey), and Hergé (author of the Tintin graphic novels). He lives in North Carolina with his family and pet pygmy hippopotamus, Etwart.

Heads up on the category tags: I had NO idea what to tag this as; if I had a mythology/religion category or something on guides, those would be a better fit but these will have to do!

Also, this review got super long, sorry! That seems to be a trend with my late-night writings

2 thoughts on “Review: Zeus is My Type by D. W. Frauenfelder”

Welcome readers!
My name is Sam and I blog about all things bookish, as well as life updates on my adventures across Canada.