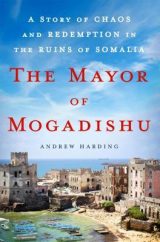 This is my first nonfiction read of the year! Honestly this probably wouldn’t have been something I’d have picked up on my own if I wasn’t approached first, but I’m glad I did because I knew very little of the history of Somalia, or current affairs, before I read this book. While the author presents all this as honestly as he can, he’s also sure to include a more human side of the story, focusing his book on the former mayor but also many others he’s met during his travels.

The Mayor of Mogadishu: A Story of Chaos and Redemption in the Ruins of Somalia by Andrew Harding
Genre: Nonfiction / Biography

In The Mayor of Mogadishu, one of the BBC’s most experienced foreign correspondents, Andrew Harding, reveals the tumultuous life of Mohamoud “Tarzan” Nur – an impoverished nomad who was abandoned in a state orphanage in newly independent Somalia, and became a street brawler and activist. When the country collapsed into civil war and anarchy, Tarzan and his young family became part of an exodus, eventually spending twenty years in north London.

But in 2010 Tarzan returned, as Mayor, to the unrecognizable ruins of a city now almost entirely controlled by the Islamist militants of Al Shabab. For many in Mogadishu, and in the diaspora, Tarzan became a galvanizing symbol of courage and hope for Somalia. But for others, he was a divisive thug, who sank beneath the corruption and clan rivalries that continue, today, to threaten the country’s revival.

The Mayor of Mogadishu is a rare an insider’s account of Somalia’s unraveling, and an intimate portrayal of one family’s extraordinary journey.

I tend to avoid nonfiction because I’m afraid I’ll find it boring. I’d really like to push myself to explore this genre more but for now I’ve been keeping it safe by staying with fiction reads.

However, this book was far from boring and I think that’s due to two reasons: 1) this isn’t a topic I was familiar with so I had a lot to learn and 2) the author’s writing style is incredibly captivating, which makes learning about a new subject so entertaining!

The author writes like a journalist (which he is) but it translates well to book form, and it’s obvious that the he’s in his element. As a journalist, Harding is perhaps best suited to be sharing this story, as he does so honestly while always maintaining respect for those people whose lives he covers.

This is largely a biography of former mayor, Mohamoud Nur, but the author uses his story to tell the story of Somalia, and it’s through learning about his life and those around him that we’re able to see a more human side of this country. Like the nicknames that are such a huge part of Somalian culture – for the mayor, he gains his nickname Tarzan as a young boy. Or President Siad Barre’s attempts to establish a Somali alphabet, which increased the literacy in the rural areas of the country exponentially. These aspects are rarely covered in popular media but here they allow us to see a fuller picture of life in Somalia.

Violence is still ever-present in Somalia and the author doesn’t shy away from this. The country has faced daily bombings and shootings, corruption, and famine. Tarzan’s own family has long missed the days where they felt safe in their own country.

I think most telling is when Harding compares Mogadishu to the other war sites he’s visited. Here, there is no time for healing, and destruction just piles on destruction. As Harding describes it, war in Mogadishu is “a way of life” (141).

Still, this doesn’t stop people from returning home, including Tarzan himself. No matter where he moves in the world, he always finds his back to Mogadishu. Many refugees seem to feel the same hope for what the country and city could be.

On one of Harding’s later visits to Somalia, he’s surprised to see a traffic cop directing traffic in what has been a very volatile area. I wanted to end off my review with this passage because I think it sums up well what the author writes of the hope that persists in Mogadishu in the face of violence,

“The famine wasn’t over. Al Shabab remained an existential threat. But here was a middle-aged man – someone who must have been able to remember how smoothly this roundabout had functioned two decades ago – charging out into the chaos, waving his arms at the traffic, convinced that in this city of brandished guns and quick tempers, the time had come for someone to try their luck with a whistle.” (201)

About the Author: Andrew Harding has been living and working abroad, as a foreign correspondent, for the past 25 years, in Russia, the Caucasus, Asia and Africa. He has been visiting Somalia since 2000. His television and radio reports for BBC News have won him international recognition, including an Emmy, an award from Britain s Foreign Press Association, and other awards in France, Monte Carlo, the United States and Hong Kong. He currently lives in Johannesburg with his family.

I received a copy of this book in exchange for an honest review. All opinions are my own

How well can you remember the books you've read?
What times of day do you like to read?
September reads!
MONKEY BEACH is officially one of my favourite books. Big thanks to my friend Katie for the rec, glad I finally took it up this year!
I sure am.
A sunny #PeekABook drop this weekend in beautiful Horseshoe Bay!
What were your favourite summer reads?
New current read!
I’ve been speeding through @playcanpress plays lately and there are so many good ones!